After the Abbey, Becket’s Chapel is the town’s oldest surviving building.

The grade 1 listed building was founded as a chantry in 1174 by William D'Albini, the grandson of the William D’Albini who founded the Abbey. During the Middle Ages it served as a chapel for the many town guilds. After the chantries were suppressed by Edward VI in 1547 it became a grammar school. The school moved out for a period during the 1800s, before finally vacating it at the beginning of the twentieth century.

The Trustees of the Old Grammar School Foundation own the building, but now use it only as a source of income for their principal aim of making educational grants.

Wymondham Arts Forum leased the building from 2008, using it as a gallery, and for small musical and spoken word events.

The Arts Centre has regularly changing exhibitions from mid March to the end of November and is open on weekdays from 10 to 5 and on Sunday from noon to 5, during this period. See website for details. 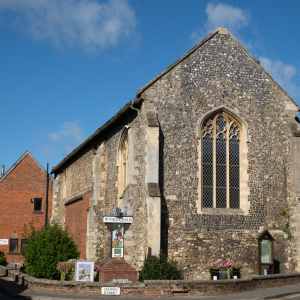