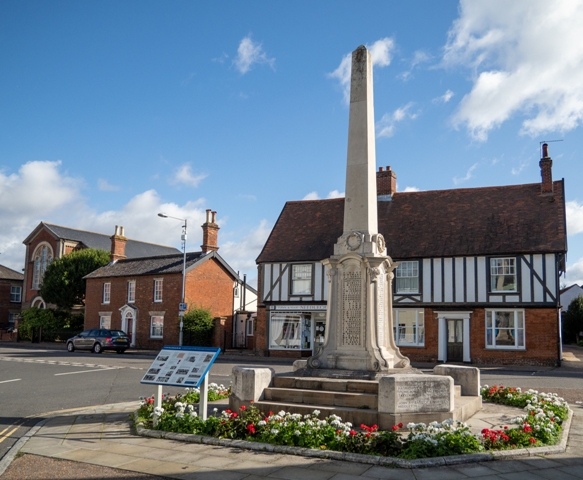 The concept of commemorating war dead did not develop to any great extent until towards the end of the C19.

Previously, memorials were rare and were mainly dedicated to individual officers, or sometimes regiments. The first large-scale erection of war memorials dedicated to the ordinary soldier followed the Second Boer War of 1899-1902, the first major war following reforms to the British Army which led to regiments being recruited from local communities and with volunteer soldiers. However, it was the aftermath of the First World War that was the great age of memorial building, both as a result of the huge impact the loss of three quarters of a million British lives had on communities and the official policy of not repatriating the dead, which meant that the memorials provided the main focus of the grief felt at this great loss.

At the annual Wymondham Parish Meeting in April 1919 a committee was set up to establish a war memorial. Various schemes were considered, including a cottage hospital, almshouses, nursing facilities, a monument in the Market Place or Fairland, church memorials, and a recreation ground. A proposal for a monument at an estimated cost of c£300-£500 was put forward but there were some disagreement as local people wanted a utilitarian form of memorial and some also argued that inscribing the names of the fallen on a monument would duplicate schemes already in hand at Wymondham Abbey and inside the parish church.

By May 1920, however, the monument scheme had been settled on and a stone obelisk was unveiled, in Town Green on land donated by Mrs H L Cautley, on 24 July 1921 by Major H L Cautley OBE. The memorial commemorates 143 local servicemen who fell in the First World War, 43 men who fell in the Second World War, and 3 civilians killed during the Second World War by enemy action. In 2015, the nationally-produced VC slab for Company Sergeant Major Harry Daniels, Rifle Brigade, was incorporated into the paving at the foot of the monument.

PLAN: the memorial is located in Town Green, at the junction of Vicar Street and Middleton Street.

EXTERIOR: the memorial is in the form of a stone obelisk on a tall, elaborate pedestal, with angle-set scrolled acanthus leaf console brackets. To each face is a segmental arch, beneath which is a shouldered inscription panel with foliate borders. The base of the obelisk has a wreath to each face; the front face has a Latin cross carved in relief to the shaft of the obelisk. The whole stands on a square three-stepped base, the corners of which are chamfered; at these corners are low inscription stones carrying the names of the dead of the Second World War. The memorial stands within an area of decorative paving surrounded by a border for planting (later addition). The pedestal bears the First World War names in incised and black painted lettering. The dedication is carved in relief around the bottom of the pedestal, and the Second World War inscription has been added to the low stones around the base in incised and black painting lettering. The dedicated inscriptions are carved in relief with the names incised and painted.